Not long ago, I received a letter from a health insurance company regarding a patient of mine who was being treated for a very serious chronic disease. The insurance was willing to cover a ginger supplement to help with her chemotherapy side effects of nausea and vomiting. With the letter, they included a research study supporting these claims. Intrigued, I decided to learn more about ginger and its health benefits. Here’s what I discovered.

The scientific name for ginger is Zingiber officinale, while its roots are known as Rhyzomus zingiberus. Ginger is a flowering plant originally from Southeast Asia, but its thick roots have been also used in traditional medical practices of China, India, Polynesia, and Africa.

In the fields of Ayurvedic medicine and Traditional Chinese Medicine (TCM), ginger is well regarded for its properties. Its active ingredients are gingerol and shogaol. Raw ginger contains the highest concentration of these molecules, but many find uncooked ginger to be unpalatable. As a result, supplements and herbal teas are popular alternatives.

Ginger and Nausea and Vomiting

Ginger has been extensively studied regarding its effect on nausea and vomiting, especially among cancer patients. A study by Dr. Abdul-Aziz and colleagues showed that ginger acts on the same parts of the brain as powerful anti-nausea drugs like odansetron (Zofran) and palonosetron (Aloxi). In the study, nausea symptoms were reduced by 40 to 50 percent with the help of this plant.

Up to 70 percent of women will experience nausea during pregnancy. It is most common during the first 12 weeks, sometimes lasting up to 20 weeks. A natural, safe, and effective treatment is preferred, and ginger is a common choice. A meta-analysis by Dr. Ding in 2012 confirmed that there was no evidence of fetal toxicity in a total of 500 women from five separate studies when taking ginger at the recommended dose of 1,000-4,000 mg per day.

Likewise, a  2014 study in Nutrition Journal evaluated a population of 1,278 women and discovered that ginger could safely help reduce nausea and vomiting symptoms caused by morning sickness. A 2016 study in Integrative Medicine Insights showed that ginger was more effective than placebo and as effective as vitamin B6 for the resolution of morning sickness symptoms.

Based on these scientific findings, and personal experiences, many pregnant women use ginger as either a first-line therapy or a therapy in conjunction with prescription medication for morning sickness. One should always consult with their physician prior to taking herbal medications during pregnancy.

Ginger may be helpful when treating viral gastroenteritis, commonly known as “stomach flu”.  An Italian gastroenterologist named Dr. Canani published an article in 2018 showing that ginger administered to an afflicted pediatric population reduced vomiting episodes by 20 percent and an overall number of sick days from school by 28 percent. Similar studies are also being conducted in the United States.

During travel to certain countries, some are at risk for bacterial diarrhea. Also known as traveler’s diarrhea, this gastrointestinal malady occurs throughout the world and is caused by the abnormal growth of E. coli bacteria, resulting in frequent diarrhea and dehydration.

The toxin released by these bacteria binds to cells in the gut, resulting in diarrhea. A recent study by Dr. Chen showed that ginger can bind to the same target site in the gut and block the effect of the bacterial toxin, reducing diarrhea symptoms. Dr.  Chen believes ginger may be a better alternative for symptomatic treatment of traveler’s diarrhea than prescription medications.

One major breakthrough in the field of medical science is our realization that the health of our mouth will interrelate with the health of our entire body — caring for our teeth, as well as the gums, can have a positive impact on overall health. A solution of ginger juice, rosemary, and marigold was shown in a 2016 study to be as effective as medical-strength chlorhexidine in the reduction of oral bacteria.

Another study by Dr. Eslami and his team in 2015 showed that ginger juice was an effective treatment for yeast-related oral infections. This is likely due to ginger’s innate antimicrobial properties.

Dr. Tiwari also stated in a 2016 review on ginger that the plant’s anti-inflammatory and antioxidant properties may also decrease the risk of gingivitis and oral cancers. For oral-health-related benefits, Dr. Tiwari strongly supports regular use of a ginger-based mouthwash, which can be made at home by adding ginger juice to a cup of water. Brushing with a ginger-based toothpaste can also be considered.

In traditional medicine, ginger is highly respected as a treatment for viral upper-respiratory infections. Multiple studies have shown ginger to be a COX-2 inhibitor, which allows it to play a similar role as NSAID drugs (ibuprofen, naproxen, indomethacin) to reduce muscle aches and fevers.

Additionally, ginger has been shown to have “anticholinergic activity” on the respiratory tract,  which helps reduce chest congestion and cough when an infection is present. Therefore, ginger is an excellent option to help treat the symptoms of respiratory infections, including wheezing.

Despite success in ancient medicine traditions, ginger is not well studied as an antiviral supplement, and more studies need to be done to analyze its antiviral properties. However, based on these studies, 2,500 to 4,000 mg of ginger a day can be considered.

Studies have shown that at any given time, approximately one in three adults over age 65 have osteoarthritis, which is associated with increasing age. There is no cure for osteoarthritis, and as it stands, the best treatment is disease prevention and symptom alleviation.

According to Dr. Baliga, ginger acts on multiple inflammatory pathways to reduce joint inflammation, which in turn slows the progression of arthritis while also reducing the painful symptoms.

Just like non-steroidal anti-inflammatory drugs (ibuprofen, naproxen, and diclofenac) ginger works as a COX-2 inhibitor to reduce inflammation in the joints and appear to help prevent the degradation of joint cartilage, the cause of arthritis. Suggested dose: 2,500 to 4,000 mg per day.

As populations around the world become heavier, diabetes has become more common. One in three kids born today is at risk of developing diabetes if the current trend continues. Although many people do not realize it, diabetes is a disease that can result in a wide spectrum of end-organ damage. The most common complications are vascular disease and neurologic complications. However, there are known diabetic complications to almost every organ system in the body. The proposed mechanism behind these complications in diabetes is caused by persistently elevated blood sugar levels or hyperglycemia.

In a review of ginger by Dr. Yiming Li, it was shown that ginger may be able to prevent some common diabetic complications. Dr. Li reports that ginger helps promote blood sugar control, as shown in animal models. Rats given high dose ginger supplements (800 mg/kg, a dose not recommend for humans) had a 24 to 53 percent reduction in blood sugar levels compared to the control population of diabetic rats. Ginger was also shown in this study to protect the liver, kidneys, nerves, and eyes from diabetic complications like fatty liver, kidney disease, neuropathy, and cataracts.

Lifestyle habits such as intermittent fasting and low carb diets can also be useful in those with diabetes.

What we know about ginger and what it can do extends beyond the scope of this article. Hundreds of reputable scientific studies and papers about ginger and its many uses exist, and new discoveries are published about ginger every year. Ginger is frequently consumed as a food, supplement, or essential oil —or consumed as an herbal tea. It plays an important role in overall health for millions around the world.

*Special Thanks to Austin Bowden, BS,  who helped me conduct research for this article. 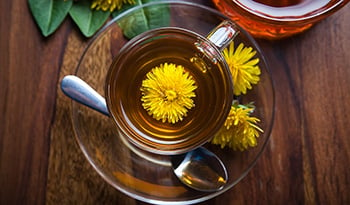 The Health Benefits of Dandelion Root

39,796 Views
The common dandelion, Taraxacum officianale, is generally viewed as an annoying, invasive plant that’s challenging to control, but it’s actually a wonder weed with marvelous health benefits that range from improving digestion to controlling psoriasis. 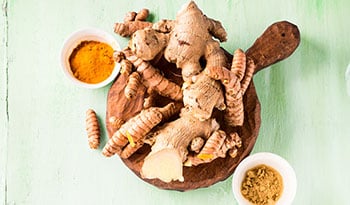 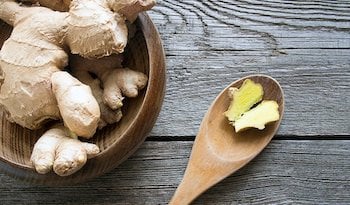 40,456 Views
Excessive menstrual bleeding, or menorrhagia, is a common female complaint that may be entirely prevented by a simple herbal prescription – capsules of ginger.