Fight Inflammation with a Delicious Cup of Golden Milk 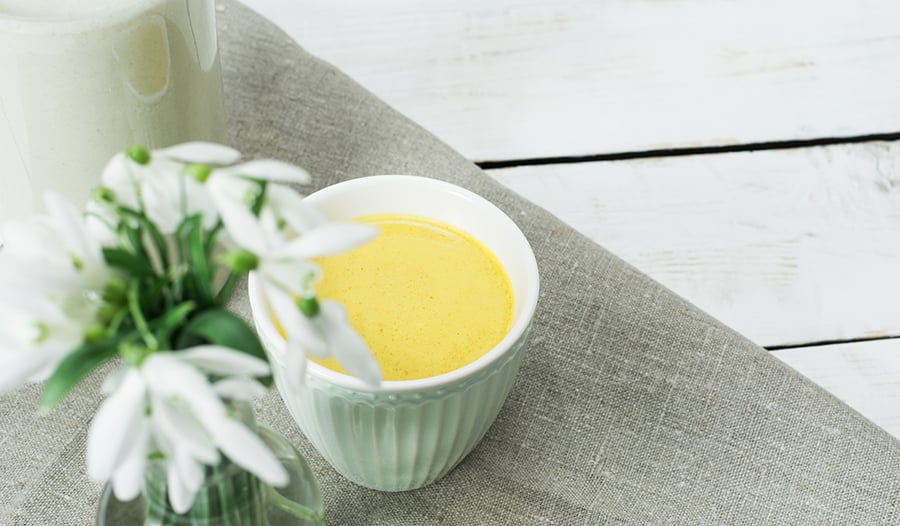 Golden milk is an Ayurvedic drink made with turmeric that stands the test of time in terms of health benefits. Turmeric is a spice known to have strong anti-inflammatory properties that may help with a wide array of health conditions. As part of a balanced diet, which also includes other anti-inflammatory foods, golden milk may make a difference in one's overall sense of health and well-being.

Golden Milk Throughout the Ages

In spite of its current popularity, golden milk is actually a rather ancient beverage that originates from Asia. Under its traditional name of haldi doodh, golden milk is widely popular in India as well as in other parts of the continent.

Turmeric, which is the ingredient that gives the milk its golden color, is a staple in Indian cooking and is known to provide several health benefits. India is the world's largest consumer of turmeric, and the country is also the leader when it comes to turmeric production.

Inflammation is a defense mechanism of the body. When there is an infection, the body's natural response is to increase the blood flow to the specific area of the body that has become inflamed. As a result, this part of the body may start to swell, heat up, and fill with neutrophils, which are white blood cells that actively digest any microorganisms that are causing the infection. It's essential to be wary of any sense of inflammation because this condition is often a sign of chronic disease.

For those who are not 100% sure whether they are experiencing inflammation, there are a few signs that can be looked out for. Note that it is important to consult with your healthcare provider as soon as any concerns arise.

The chief ingredients in turmeric that make it anti-inflammatory are compounds known as curcuminoids. These curcuminoids provide a variety of health benefits, but the curcuminoid that packs the most anti-inflammatory punch in golden milk and turmeric is curcumin. Not only is this compound great for reducing inflammation, but it also works as an antioxidant to fight free radicals throughout the body's systems.

For the best results, curcumin should be consumed in quantities of at least 500 milligrams per day, which is why some people opt to take this compound in supplement form. Fortunately, a cup or two of golden milk can provide much of this daily recommendation.

How Often Should Someone Drink Golden Milk?

One of the best aspects of golden milk is that there are no reported side effects for most people, however, pregnant women should limit their intake of turmeric because it can affect the uterine lining. For those looking to reap the most favorable results from consuming turmeric in foods like golden milk, consuming at least 500 milligrams of curcumin is recommended. Since a single teaspoon of turmeric grants about 200 milligrams of curcumin, it may be a good idea to drink two or three cups a day for the most noteworthy anti-inflammatory results.

In addition to the anti-inflammatory health benefits, golden milk also has other noticeable advantages, partially due to the positive health effects of curcumin and partially due to the other ingredients that go into the beverage. In addition to being an anti-inflammatory and antioxidant, curcumin is also known for its potential to aid in the brain's functionality. This compound has been shown in studies to boost the levels of brain-derived neurotrophic factors, which promote the growth of healthy brain cells.

Additionally, turmeric may fight heart disease by helping reduce the body's cholesterol levels. This compound has also been linked to the improvement of blood vessel functionality, which may help improve the heart's health. Other ingredients in golden milk, such as cinnamon and ginger, might help in a very similar way.

The phospholipids found in dairy milk, as well as black pepper, can help the body absorb turmeric and its curcuminoids more efficiently. Turmeric is not easily absorbed by the body, so having milk in this beverage can help drinkers more quickly derive benefits. Lastly, when drunk before meals, golden milk can help with feelings of satiety.

For those looking to make their own golden milk recipe, the process is relatively simple. The dairy milk in this recipe can be replaced with other kinds of milk like almond or coconut milk. This will change up the general taste, and may also increase the level of sugars since milk alternatives tend to have glucose rather than lactose. Also, for extra flavor, fresh almonds, cinnamon sticks or even oats can be added.

How to Make Your Own Non-Dairy Milk

Making non-dairy milk at home is easy with these recipes.

Spices do more than enhance the flavor of our foods. These 5 amazing spices can help to fight inflammation and benefit health.

Fight Inflammation and Improve Gut Health With This Superfood

Cranberries have impressive health benefits for keeping your body, and especially your gut, in tip-top shape!